Working in the humanitarian field offers lots of opportunities; to travel, to work with interesting people and to get up close and personal with other inhabitants of the animal kingdom. And by that I don’t only mean the filthy man-animals you may sometimes need to share your flat with (socks that don’t bend? No-one needs that in the communal area, thanks).

When working in the field, you can roughly divide your relationship with animals into three broad categories: those you loathe, those you love and dinner.

When at home in sunny old blighty, there is an unwritten rule between loathsome creatures and people; creatures stay in their space, we stay in ours and if the former violates these rules they get a rolled up newspaper. Creatures in the field have not been given a breakdown of these rules, which means they think it is completely acceptable to get up in your grill. For example, the cockroaches that think it’s ok to have a pool party in the glass of water you keep on the bedside table to sip on during the night. The rat that thought it was completely acceptable to make a nest and have rat babies in a colleague’s suitcase, a fact that she only discovered when trying to pack to leave. Or another rat – possibly related – that thought it was acceptable to share my bed in Daadab and nibble on my legs out of what was presumably boredom at 3am. Or the snake that rudely interrupted one aid worker’s private toilet time by dropping out of the tree above her head, landing at her feet and spending a good 30 seconds sizing her up before deciding it was intruding on a private moment. 30 seconds is a very long time if you are a snake, or a human being looked at by a pissed off snake.

On the flipside, there will be an inevitable moment in every aid worker’s rite of passage where they fall in love with an animal and decide to adopt it as a pet, despite the fact that the animal is feral, a walking disease infestation or a completely inappropriate ‘pet’(here I’m thinking dik-diks, falcons and pangolins). Let me explain the pangolin one; for those who don’t know, a pangolin is an extremely endangered aardvark type creature that lives in the jungles of West Africa. Whilst living in a camp in the middle of said jungles, a local hunter came to us and asked us if we would like to buy ‘this’. ‘This’ was a pangolin and its very small baby. We asked what he would do with the pangolin if we didn’t buy it. Well, eat it of course. Herein started the dilemma; did we say yes, buy the pangolin and contribute to the illegal pangolin trade, or say no and allow an endangered creature to be eaten? So of course we bought it, put it in a box, and ran around the camp collecting things that we thought it might eat (basically anything found in the ‘loathe’ section above). The thing at least had the good sense to escape that night rather than be ‘looked after’ by people clearly with limited skills in animal rescue. 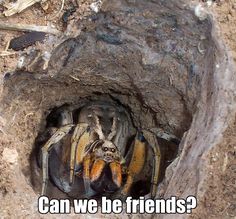 Hell to the no. Creep.

However, most aid workers fall in love with the more ubiquitous cats or dogs. Aid workers will happily dedicate disproportional amounts of money and time to ensuring their feral friend is ok and starting on the course towards healthy domestication. One aid worker in Ethiopia was so concerned about his pet cat becoming pregnant that he convinced the camp medic to treat it with human contraceptives (it was apparently a successful strategy). In Liberia, two ‘guard’ dogs that came part and parcel with a guest house ended up being the most attended to patients of the staff nurse, rather than the staff themselves.

Then there is the last and saddest category; dinner. In many places, there are none of your new fangled fridges and freezers (or the electricity to run them) for storing your food at the perfect temperature before consumption, so you make do with the next best thing – fresh meat. So fresh, that sometimes it is tied up outside the kitchen when you go in for breakfast, thus also eliminating the need for printing a menu. Sometimes, dinner comes to you from unexpected sources. During a community meeting in Sierra Leone, my team and I were presented with a goat as a mark of gratitude for our work. Thinking this was purely symbolic, and we weren’t actually going to take the goat, I put this out of my mind, until – when bouncing over a particularly large pot hole – I heard a small bleating coming from the boot. To try to appease my vegetarian guilt, I even tried to feed the thing the last of my emergency shortbread stash. It was not in the least bit interested. I made sure I was out of the area when the ‘cooking’ process started.

Sometimes the worlds of humanitarians and animals collide in unexpected ways, and – just to pre-empt you – these usually don’t end well for the animal in the story. In Guinea, an Ebola treatment centre was thrown into temporary disarray when a passing motorbike startled a group of chickens, causing one to fly over the perimeter fence and into the red zone (the high infection risk section of the centre, to which entry and exit is highly controlled). The chicken roamed around whilst staff robed up into their plague-doctor-esque protective equipment to then spend the best part of an hour chasing it around the red zone in 40 degree heat whilst basically wrapped in cling-film. Once the chicken was safely isolated in a box, a debate ensued around the fate of the chicken; How likely was it that the chicken had become infected with Ebola? Could chickens transmit Ebola? Would the plucky fowl make it out of the red zone? Such practical and philosophical questions milled around until the director of the centre reminded staff that they had actual patients who needed their attention, and therefore, could someone please just kill the chicken, incinerate it and pay the owner for his loss. These are just some of the harsh realities of working in epidemics, my friends.

Whether is a chicken, a goat, a dog or a pangolin, you’re going to end up experiencing some animal magic on your deployments. And if you don’t, content yourself that 1000s of microscopic animals will be more than happy to accommodate you, and work their magic internally for you instead.